Legendary performer and philanthropist Dolly Parton captured the hearts of two University of Mississippi audiences during her recent visit to accept the Legacy Award from the Ole Miss Women’s Council for Philanthropy (OMWC).

Storytime with Dolly featured the special guest reading “The Little Engine That Could” by Watty Piper and talking about literacy to a packed Gertrude C. Ford Center for the Performing Arts. The event sponsored by Regions Bank was part of the OMWC Rose Garden Literacy Project.

“Regions Bank has served Oxford and communities across North Mississippi for decades, and community engagement is part of Regions’ mission to improve the quality of life in the communities we serve,” said Brett Shaffer, community relations manager for Regions Bank. “Education is a key part of our work, so we were honored to sponsor Storytime with Dolly.

“We salute the Ole Miss Women’s Council for Philanthropy and the University of Mississippi for their work to support education and opportunities for all,” he said.

Then, Parton was honored at the Legacy Award dinner held at The Jefferson event venue and delighted the audience by singing a couple songs and playing her bedazzled guitar. The C Spire Foundation was the presenting sponsor.

“The C Spire Foundation is very pleased to support the Ole Miss Women’s Council and the Legacy Award since its very beginning. Our values align similarly in a belief in education and mentorship that will inspire and develop students’ leadership skills and future success,” said Beth Pickering, executive director of the C Spire Foundation.

“The 2020 Legacy Award has been like no other. Although it was delayed because of the pandemic, it’s just one example of the kind of work the OMWC members pull off when they set their minds to something. It was such a privilege to finally honor Dolly Parton, a living legend and such an amazing example of philanthropy for all of us. It’s an evening we will remember always,” she said.

The Legacy Award recognizes individuals who epitomize the OMWC’s goals of philanthropy, leadership and mentorship. Although Parton is known as a successful country music singer, songwriter, instrumentalist, record producer, actress and author, her commitment to elevating other people is a major part of her life. The 2020 award presentation had to be postponed twice because of COVID-19.

“Having Dolly here will be remembered as one of those magical Ole Miss moments, which makes the Ole Miss Women’s Council family unique and illustrates the widespread appeal of the mission to create a more caring and ethical society one scholar at a time,” said Liz Randall, chair of the OMWC. “Dolly Parton could have truly been anywhere in the world, and she choose to spend a full weekend with us. That speaks to the relationship and respect she has for Mary and Sam Haskell and her support of the Ole Miss Women’s Council.”

Parton and the Haskells are longtime friends and business associates. Mary Haskell is a member and former OMWC chair. Sam Haskell of Magnolia Hills Productions is the executive producer of Parton’s movies and specials and recently won an Emmy for Outstanding Television Movie for the 2021 “Dolly Parton’s Christmas on the Square.”

Haskell and Parton met 42 years ago, and then he became her agent with the William Morris Agency in 1995. After retiring from the agency business in 2005, the two segued into a production partnership with Warner Brothers Studio and have successfully executed movies together for the past decade.

One focus of the popular entertainer’s philanthropy is her Imagination Library, a program that mails free, high-quality books to children from birth to age five, regardless of their family’s income. This organization mails books monthly to children around the world.

“I see the unparalleled and universal appeal of Dolly Parton due in large part to her consistency in being respectful and kind to all people, and her lifelong commitment to philanthropic efforts,” Randall said. “Dolly has been honest about why literacy, for example, is so meaningful to her family by citing candidly that her father could not read.

“Her vulnerability and honestly are endearing,” she continued. “She took that hardship in her life and turned it into an organization, the Imagination Library, which has distributed close to 200 million books around the world — the perfect example of a philanthropist doing it for all the right reasons. She is elevating the lives of children, who are the most important part of society.”

Parton was hosted for the weekend by the Haskells, who took her to several local spots.

“Dolly loved the beauty of Oxford and the Ole Miss campus, but she especially responded to the hearts of all the people involved that she met. She was overwhelmed by the generosity she experienced here during her Legacy Award weekend,” said Mary Haskell.

Philanthropy was on display by the Ole Miss family throughout the OMWC Legacy Award weekend.

At Storytime with Dolly, the OMWC surprised Sarah McLellan, executive director of the Lafayette County Literacy Council, with a $25,000 contribution for the Imagination Library program. Haskell shared the inspiration behind the gift.

“When the OMWC held our 20th anniversary in 2020, Dolly allowed us to auction a dinner for 10 people to dine with her at our home the evening before the Legacy Award dinner,” Haskell said. “It seemed only right that we share the proceeds of that successful fundraising opportunity she provided us, so the $25,000 donation to her Imagination Library, supporting the local chapter here in Lafayette County, was determined.

“Dolly said, ‘This is the first time I’ve ever seen one charity donate to another charity; now that’s somethin,’” Haskell said.

In addition to the OMWC gift, title sponsor C Spire Foundation announced it would make a $25,000 donation to the North Panola County Imagination Library program in honor of Parton.

“Philanthropy is contagious and works the best when it serves in all directions — this creates a compounding effect in the impact,” Randall said.

In addition to the C Spire Foundation, there were multiple event sponsors for Parton’s visit. Platinum Sponsors were Sanderson Farms, Cooper Communities Inc. and Regions Bank. Gold Sponsors were FedEx Corp. and mTrade.

The OMWC was founded 22 years ago at the university. An accomplished council of female leaders and philanthropists has secured $20 million to endow scholarships awarded to deserving students.

In addition, the OMWC program provides significant guidance and training in leadership skills, exceptional life and career development, meaningful personal growth through cultural and travel opportunities, and beneficial alumni networking throughout the students’ tenure at the university. Once an OMWC Scholar, a student can receive financial resources from the council’s Global Leadership Circle to pursue study abroad or internships on the national and international levels. 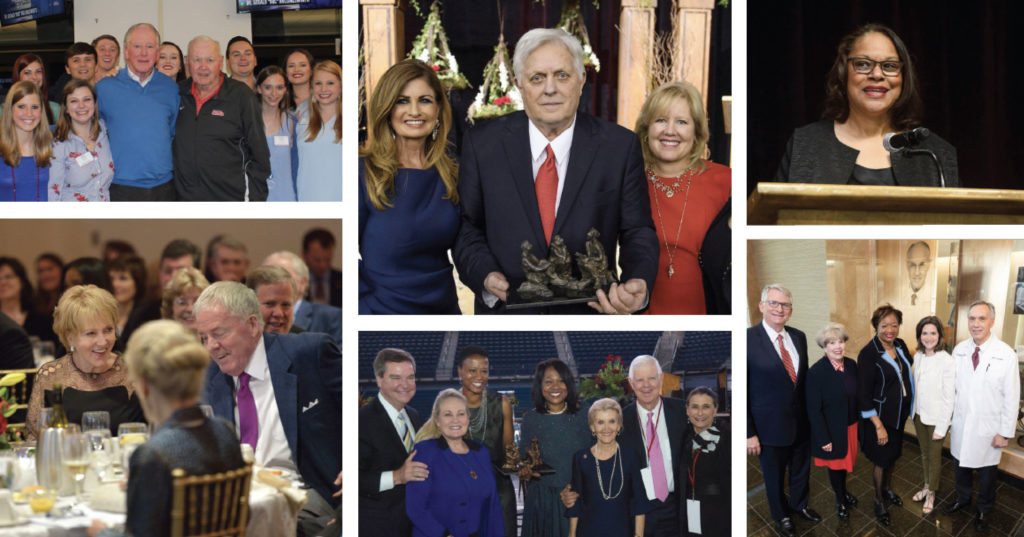 History of the Legacy Award

Twenty-four diverse women gathered at the University of Mississippi in the year 2000 to explore how they might nurture young men and women to help them become more successful professionals and servant-leaders in their communities. You could say the Ole Miss Women’s Council (OMWC) set out to change the world one student at a time. When the council was created, its founders understood that the success of future generations of University of Mississippi students depended on more than just providing scholarships. This organization of remarkable women recognized that success in and beyond college relies on strong relationships and nurturing support those relationships provide.

Mentorship, therefore, became the cornerstone of the OMWC scholarship program. Over the last 20 years, approximately 147 students have blossomed under the program, once described as one of the most creative and timely scholarship programs in the nation. The hands-on involvement of visionary OMWC members builds confidence in the scholars and broadens their views and experiences. Because of mentoring experiences and leadership training, OMWC scholars not only graduate and pursue meaningful careers, but they also become servant-leaders who understand the importance of giving back. The long-term impact of the program will be felt for generations to come.

In celebration of those scholarship recipients and the OMWC’s first decade of existence, the Council created the Legacy Award to recognize individuals who epitomize the Council’s goals of philanthropy, leadership, and mentorship. Through their contributions these honorees have brought about definitive, positive changes in Mississippi’s Flagship University, our state and nation.

Thank you to our 2020 Sponsors